Using the foundation principles of Tai Chi and Martial Arts, it encourages younger children to interact and move; improving their co-ordination, agility and balance through five fun characters: Mabu The Monkey, Boris The Tiger, Patsy The Bear, DJ Fin and Master Storky.

Using these 5 characters, Linda has created a series of videos that children can watch whilst exercising again and again.

Linda Hall’s love of fitness and dance started from an early age. Having danced her way through childhood, Linda first qualified in Exercise to Music with the YMCA in 1992 but it was martial arts that really appealed to Linda after meeting the inspirational Chinese Grand Master Leung Guo Qiang, famous throughout Southern China for his Wing Chun opera house style of Kung Fu.

Throughout years of training in this art, Linda also qualified in other fitness disciplines and taught fitness as a full time career in many leading health centres throughout West London from 1996 onwards. Linda has taught martial arts to a number of premiership footballers at Chelsea FC, has appeared on TV promoting health and fitness plus performing in many live performances throughout the UK.

Linda is also qualified in Stott pilates, pre/post-natal fitness and aqua fitness. In 2004 Linda fully qualified as a Chinese Martial arts trainer and was accredited with her Masters in Zhaoqing, China.

In 2005 Linda set up her first club called “Biaw Yian” (meaning performance martial arts) and, through her classes, extended into primary schools and sporting events, always with the sole aim of inspiring young people in particular to keep fitness a top priority.

The idea of Animal Fu came directly from her interaction with infant and junior school aged children, coupled with her experience and extensive training. With this in mind, Linda founded Animal Fu in 2011 with the idea of bringing Martial Arts to young children by translating the best of her learning into fun, music led activities to keep children engaged and enthused. By adding the animal characters with their signature moves, music, stories and verbal sounds she created Animal Fu. She has found that children absolutely love to do Animal Fu!

You can do Animal Fu!

Watch this video for a taste of a typical class…

Boris the Tiger was born in a part of Russia which is very cold and covered with snow for a large part of the year.

Boris is a very special tiger as, even though he is big and tough, he knows to use his strength only to help others.

DJ Fin was born on the streets of Great Britain and loves nothing more than playing his music and making others dance and TIP TAP their feet along to the rhythm!

He is a very cool and streetwise grasshopper. Not only does he know to treat others with respect, but also knows how to take good care of the world around him. 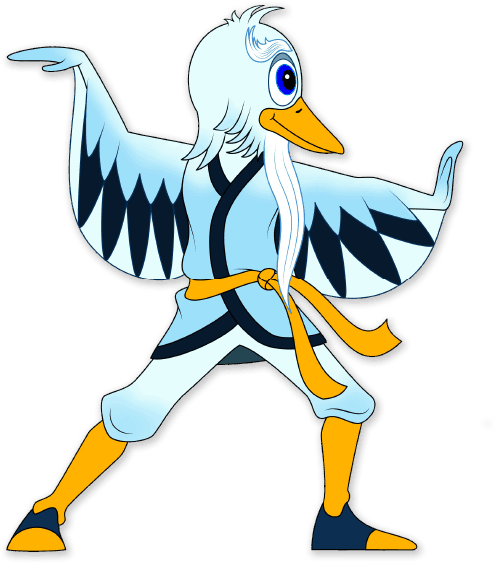 Master Storky was born in China where Animal Fu began many years ago. He is a very special Stork as, not only can he fly beautifully using his powerful wings, but he also knows the importance of keeping his mind and body in tip top condition!

Master Storky is famous all around the world for the teachings of Animal Fu. Let’s all bow to Master Storky… Bow down low to say “hello!”

Patsy the Bear was born in Texas in America (where the cowboys come from) and she loves line-dancing. Patsy is very caring about other people around her and loves nothing more than to share all good things with her friends and family.

Master Storky taught Patsy a very special move involving side-steps, just like she uses in her line-dancing! Patsy found it hard to do at first but Master Storky said ‘believe you can!’ so she practiced and practiced until one day she found she could do it! Yeee Haaa!

Mabu the Monkey was born in the hot jungle of South America and can speak Spanish as well as English – HOLA!

Mabu has LOTS AND LOTS of energy because she eats yummy foods that are really good for her, like oranges and strawberries! But what do you think her favourite food is? Yes, you guessed it, bananas! Monkeys LOVE Bananas! She knows that if you eat right you feel right!

If your school or group is interested in one of our Animal Fu workshops, please contact us using the form below or via email to info@animalfu.com

Get in Touch with the Animal Fu team